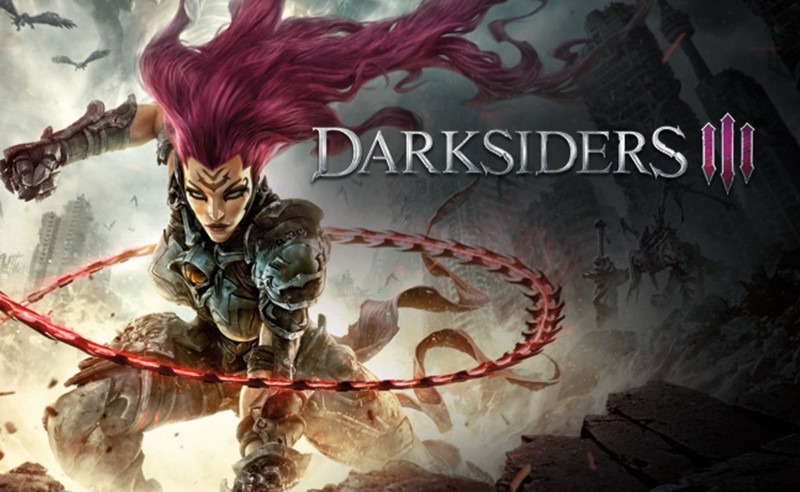 Darksiders has always felt like it belonged on the fringe. As we haven't seen many games like Darksiders III in the past decade or so. The Darksiders series has always been focus and has steady design omnipresent in all of its moving parts. It's a third-person action game that isn't afraid to stunt your progress to an end for an hour or more until the point that you figure out how to beat a seemingly-impossible boss. And of course, every game need not to be a giant open world where you have tons of never-ending supply of side quests. And that's exactly the kinda game where Darksiders 3 fits in. It isn't a giant open world game, it's all about the combat which is freaking satisfying.

But sure, this game isn't flawless, there are padding issues and other nitpicks, however the strong locales and the more than serviceable action help concrete this series as an actual action contender.

The biggest flaw, I think is the sporadic nature in Darksiders 3. Rather than having dungeons themed around these overwhelming enemies, they're simply stuffed inside destroyed skyscrapers and abandoned museums like any other enemy.

After both War and Death had a fabulous time in Darksiders 3's predecessors, it's now the turn of the perpetually angry Fury, she is incredible, offering a powerful performance that takes each scene she possesses, lending your control of her an extra dose of power. She's sent out to hunt down the Seven Deadly Sins, and every one of them serves as one of Darksiders III's collection of varied major boss fights thus to re-establish the balance between Heaven and Hell torn apart in previous games.

Fury uses a bladed whip known as the 'Barbs of Scorn', which offers a satisfying combat feedback of meaty hits in some demonic entity's face, but you need to be close to the enemy.

Talking about the graphics, while there have been games this year that have really stunned me with their magnificent open world graphics, Darksiders 3 isn't one of them. The stylized, cartoonish characters are plopped into a quite generic-looking world that lacks detail. So, you can say that this game isn't for graphics lovers, but is for the combat lovers. 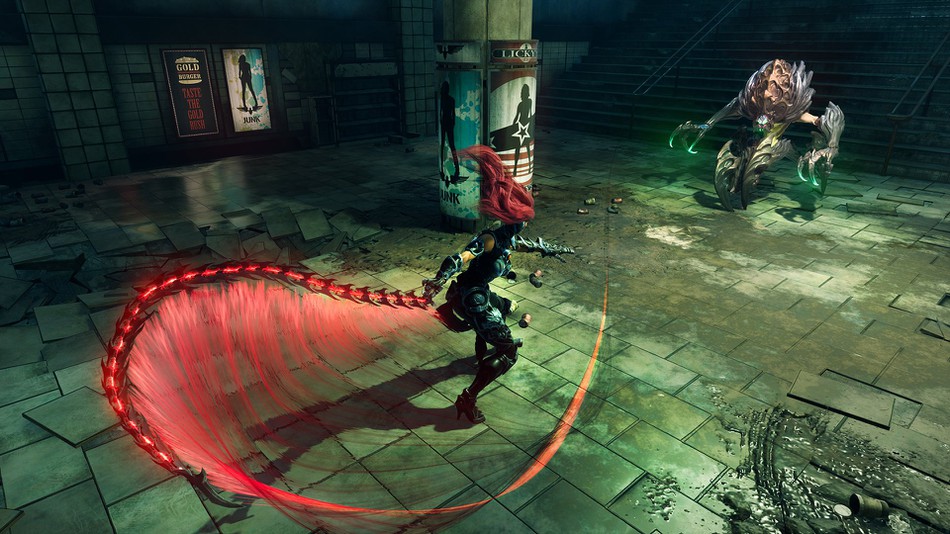 The act of combat is very easy, achieved with a single button to swing Fury's whip in all direction, striking down all enemies in her vicinity. Your heavy assault, so to speak, is given to a variety of secondary weapons you'll unlock as things progress. Fire, Thunder, and Gravity are only a couple of the things you'll come to adopt.

Despite being the combat pretty easy, this is no mindless beat them up where you just run into a group of monsters mashing your attack buttons. All way of demons, skeletons, angels, giant creepy insects, and trolls should be chopped down, and you won't get much far without being observant of their behaviors. You need to be patient, wait for their attack, time your dodge at the right time, and boom! Dodging perfectly will slow down time for a spell, opening up enemies for a vicious counter-attack which feels really satisfying. 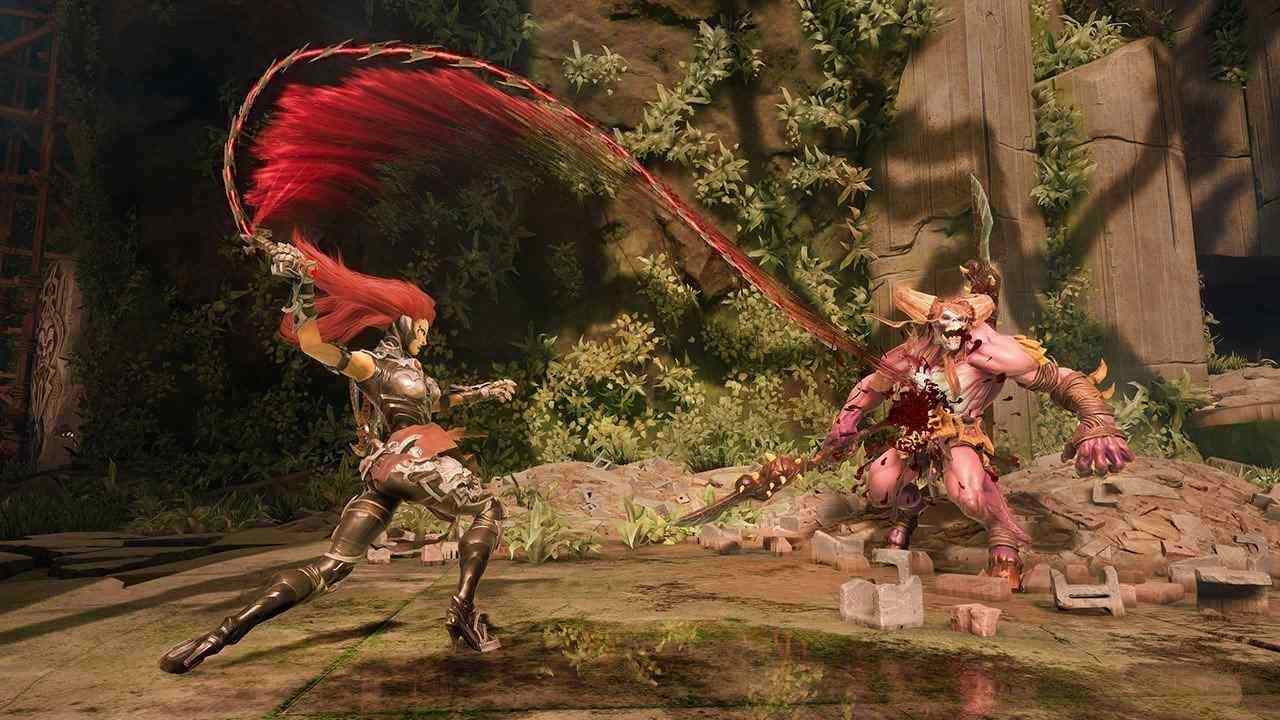 And as Darksiders 3 has taken some inspiration from Dark Souls, Fury's low survivability forces you to approach combat in a way that gives an exuberant combos. Enemies are quick and hit hard, and are mostly found in groups. With no stamina meter to talk about, there's an emphasis on dodging and keeping out of danger that deviates from Dark Souls' stringent use of energy management.

Fury's ever-expanding arsenal incorporates lots of fun toys, and it's up to you to choose which ones to power up and depend mostly on. Alongside her weapons, she gains new movement powers that give her access to new areas, and once you've unlocked them all it's amusing to switch between all her various forms to find the correct tools for the different combat and obstacle jobs.


Our ferocious fury is surprisingly vulnerable, as no matter how powerful she becomes, she still gets killed in a matter of seconds if you aren't careful. This is a bit of nuisance when Serpent Holes, what could be compared to Dark Souls' Bonfires, are spread so far apart. Trawling through bland corridors filled with boss's bitches glad to throw themselves at you is frustrating when you have someplace to be.

The bosses in Darksiders III are not messing around. While the first couple probably won't pose much of a threat, eventually you'll face one that doesn't appear to react to any trap or assault you've learned up to that point. Not to ruin any surprise, but don't be stunned if a boss doesn't go down as easily as it appears they will. It tends to disappoint abruptly having the tables turned on you, no doubt, however with persistence success eventually comes. In this way, Darksiders III feels like it's of some other time. So be ready to achieve something, not the easy way.

Gunfire Games has put forth a valiant effort, and at times, succeeds in making Darksiders 3 a worthwhile successor to the past two entries. Combat is fun and accessible while exploration is nuanced enough to stay engaging. Its throwback philosophy is comfort food for action gamers of a particular age. But because of so many technical issues with it, It feels like a package that is enjoyable yet ultimately underwhelming.