Choose Your Own Adventure: House Of Danger 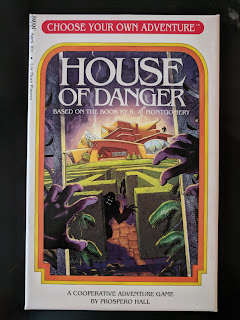 Personal History:
It will be somewhat hard to imagine for my younger readers, but there was a time not too long ago where there was a fairly limited amount of "interactive media" for a person to enjoy by themselves. Video games existed, but they weren't as ubiquitous as they are now and parental oversight was comparatively high. Board games of course existed but I'm hard-pressed to think of a single solo board game that was around during my childhood, and even if there was one, without the aid of the internet I was unlikely to stumble across it. The one exciting exception is classic Solitaire which I learned from my Grandparents who had, I imagine, even less to do as children when left to their own devices. 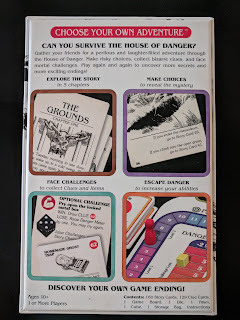 All that being the case, I read a lot when I was young, and the "Choose Your Own Adventure" series of books was a frequent library check-out for me. At the time Choose your Own Adventure books were interactive entertainment in its most portable, and socially acceptable form. For those who are totally unaware, Choose Your Own Adventure books began with a story introduction, and then gave the reader a choice to make and a page number to flip to depending on that choice. The subsequent page would give more story and then another decision, and so on until you arrived at an ending. Most endings were bummers where you died or woke up or got trapped in a dungeon of something, but there were usually one or two "good" endings that you really strove for. 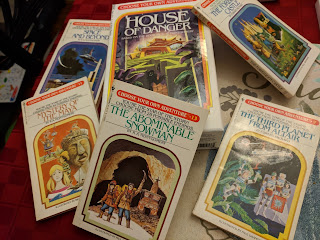 The ability to make decisions while reading was weirdly liberating, and the desire to find that "good ending" meant a lot of trial and error which made it a little exciting. Plus the stories were often fairly weird. I didn't own many of these as a kid, instead using the school library as my source, but I do own quite a few now because, while they do still make them, in my mind they are a fun time capsule item from my childhood. 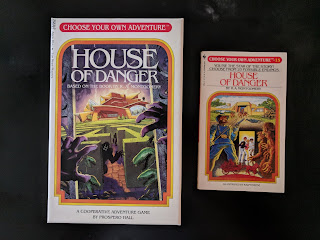 So Imagine my delight when I saw an ad online for this, a Choose Your Own Adventure board game! I bought my copy at Target, which has become the go-to place for weird simplified version of existing games, Buffalo Games dexterity products (Klask and Bonk are both great, go buy them) and board games based on throw-back licenses like this one. Licensed games can be so hit and miss, and I've definitely been burned before, but I had to give this one a try. I actually own the original book that this game is based on. I haven't read it in ages, and I've chosen not to until I play through this entire game so as not to spoil anything. 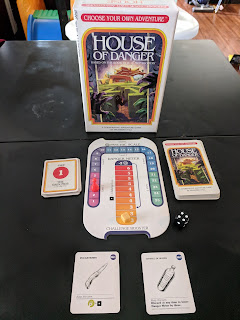 ****SPOILER WARNING!!!****
There's no way for me to do a review with pictures without showing things that can and should be considered spoilers. I've personally only played through two of five chapters as of this review, and I've limited the photos to only cards available in the first chapter. Hopefully nothing you see will spoil too much, but if even the slightest spoiler is too much spoiler for you, then maybe close your eyes, scroll to the bottom, read the final bit and then go read another review.

Gameplay:
The game begins with a nightmare, and image of which is printed on the back of the gameboard. The player or players spends two minutes studying the image. The instructions explain that the image contains clues which will help guide the player along in the game. 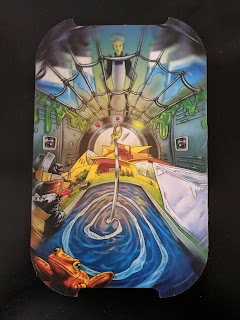 After the two minutes are over the board is flipped over to the "front" side.  In this game you take on the role of a psychic investigator who has been experiencing an intense nightmare which leads you to the titular "House of Danger". The game's story is broken into five different chapters, each of which has its own deck of "Story Cards" and "Clue" cards, both of which are placed to the side of the game board. The player begins the game with two pieces of equipment: a pocket knife and a bottle of water. These cards are kept somewhere on the table designated as the player's inventory (this could also conceivably be held as a hand of cards as well if playing solo). 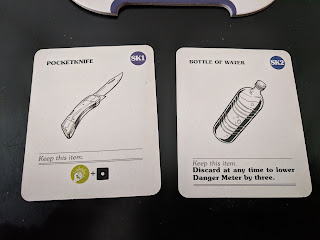 The gameboard is mostly a pair of point trackers. The first tracker is the "Psychic Scale", which is essentially an experience points meter. You gain Psychic points by overcoming obstacles or learning important things. The higher your Psychic Scale the better you will be at solving some of the challenges you will face, and the more likely new options will be available to you. Some events can also lower your status on the Psychic Scale, and two points are lost every time the Danger Meter is filled. 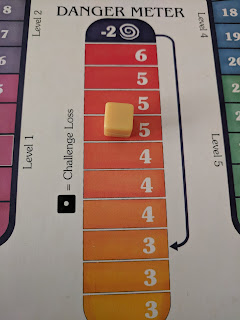 Much like the Choose Your Own Adventure books, this game is played by reading story elements and making decisions on what to do next. The Story Card deck is covered at all times to prevent reading ahead. When a player makes a decision at the end of a story card it will instruct often instruct the player to draw a Clue Card, which will then lead to further instructions. Clue cards can be items, premonitions (additional picture cards that can help guide your decisions), or bits of information which lead you to the next Story Card. All Clue Cards and Story Cards are very clearly numbered and easy to find without accidentally reading too much. 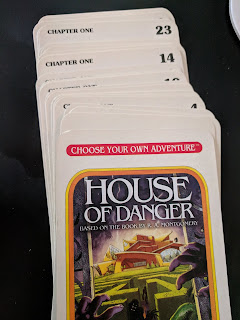 The challenges that a player must face are usually printed on the Story cards. Not every challenge must be taken, and not every challenge should be taken, however there is always the risk of missing something useful if you skip a challenge. A completed challenge often leads to a Clue Card, and these can also alter Chapter Cards at times by offering an option not previously available. 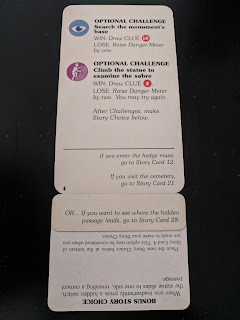 Completing a challenge is essentially rolling a die and getting a number equal to or higher than the current Danger Meter level. Each challenge has a type, indicated by the symbol printed next to it. Some items found via Clues give bonuses to challenges of a matching type, allowing the player to need a lower value to meet the challenge. Some items also allow the player to automatically complete specific challenges. 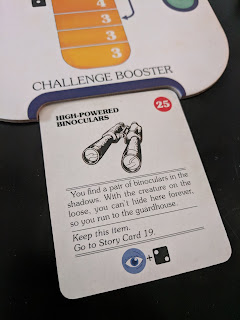 The penalty for failing a challenge varies, and is printed next to the challenge itself. It is possible for the player to die based on a story decision or failed challenge. Should the player die the card that killed her will instruct the player to move the Psychic Meter back a number of spaces, and then the player will go back to the previous Story Card and try again. 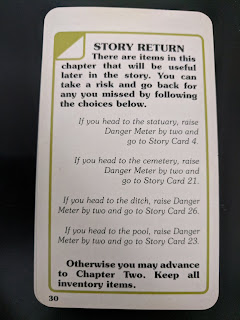 Players continue to make decisions, complete challenges and uncover clues until they reach the chapter's goal. Each chapter allows the player to backtrack once the goal is met, so it is possible to revisit skipped challenges before beginning the next chapter.

This game is designed to be played solo essentially. There's not really multiple roles to play if there's more than one of you, you'll just be able to discuss which choice to make before making that choice. I played it in a group setting, and there was maybe a little benefit to having a few people think about the situation, but as every choice leads to something fairly unpredictable I have my doubts that in terms of the game's outcome it will make that much of a difference if you choose to go it alone. As a group we had fun with it though, taking turns reading the cards and making sure the unlucky among us rolled the die as little as possible, etc. If you have a game group that likes having goofy fun then this might hit the right mark for you. 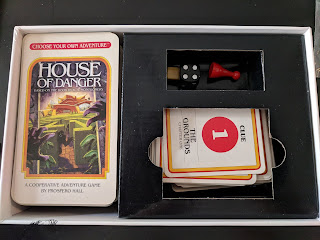 Honestly, I came to this hoping to find a board game that took the spirit of those original books and expanded it just enough to make it a slightly more "full" experience, and that's exactly what this game does. There is not a single drop of me that is disappointed by what Z-Man put into this box, from the great throwback design work to the ease of play, to the functional box insert. As I stated at the start of this review I'm only through the first two Chapters, but already my inventory is growing, my psychic abilities are progressing nicely, and and I definitely look forward to working through the remainder of it. I'll also add that the card decks for each chapter are individually sealed, leaving practically no guesswork when setting up a game. 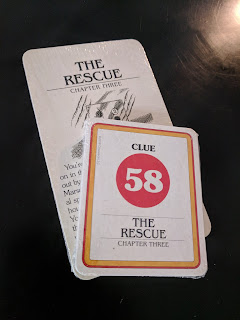 The biggest downfall to this game is that it will have essentially no replay value for me once I've completed it. I know that's just in the nature of the type of game it is, but I suppose it's something to consider when deciding to make the purchase. Since I'm a CYOA book collector coming into this it'll probably sit on my shelf with the books for a while after I'm done.

Final Verdict:
For me, this is exactly what I wanted it to be. It's like an extremely light RPG experience that can be played as a group activity if you'd prefer. It maintains that same campy feel as the original books, but with just enough more going on so as to keep it interesting. This game is not going to be for hardcore gamers or people bothered by dice rolls dictating their fate, but for my money it's an easy "Good" 4/5.