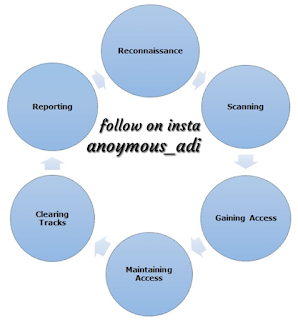 What is the process of hacking or phases of hacking?
Hacking is broken up into six phases:The more you get close to all phases,the more stealth will be your attack.

1-Reconnaissance-This is the primary phase of hacking where hacker tries to collect as much as information as possible about the target.It includes identifying the target,domain name registration records of the target, mail server records,DNS records.The tools that are widely used in the process is NMAP,Hping,Maltego, and Google Dorks.

2-Scanning-This makes up the base of hacking! This is where planning for attack actually begins! The tools used in this process are Nessus,Nexpose,and NMAP. After reconnaissance the attacker scans the target for services running,open ports,firewall detection,finding out vulnerabilities,operating system detection.

3-Gaining Access-In this process the attacker executes the attack based on vulnerabilities which were identified during scanning!  After the successful, he get access to the target network or enter in to the system.The primary tools that is used in this process is Metasploit.

4-Maintaining Access-It is the process where the hacker has already gained access in to a system. After gaining access the hacker, the hacker installs some backdoors in order to enter in to the system when he needs access in this owned system in future. Metasploit is the preffered toll in this process.

5-Clearning track or Covering track-To avoid getting traced and caught,hacker clears all the tracks by clearing all kinds of logs and deleted the uploaded backdoor and anything in this process related stuff which may later reflect his presence!

6-Reporting-Reporting is the last step of finishing the ethical hacking process.Here the Ethical Hacker compiles a report with his findings and the job that was done such as the tools used,the success rate,vulnerabilities found,and the exploit process.